What is DyAc in Gaming?

What is DyAc in Gaming? 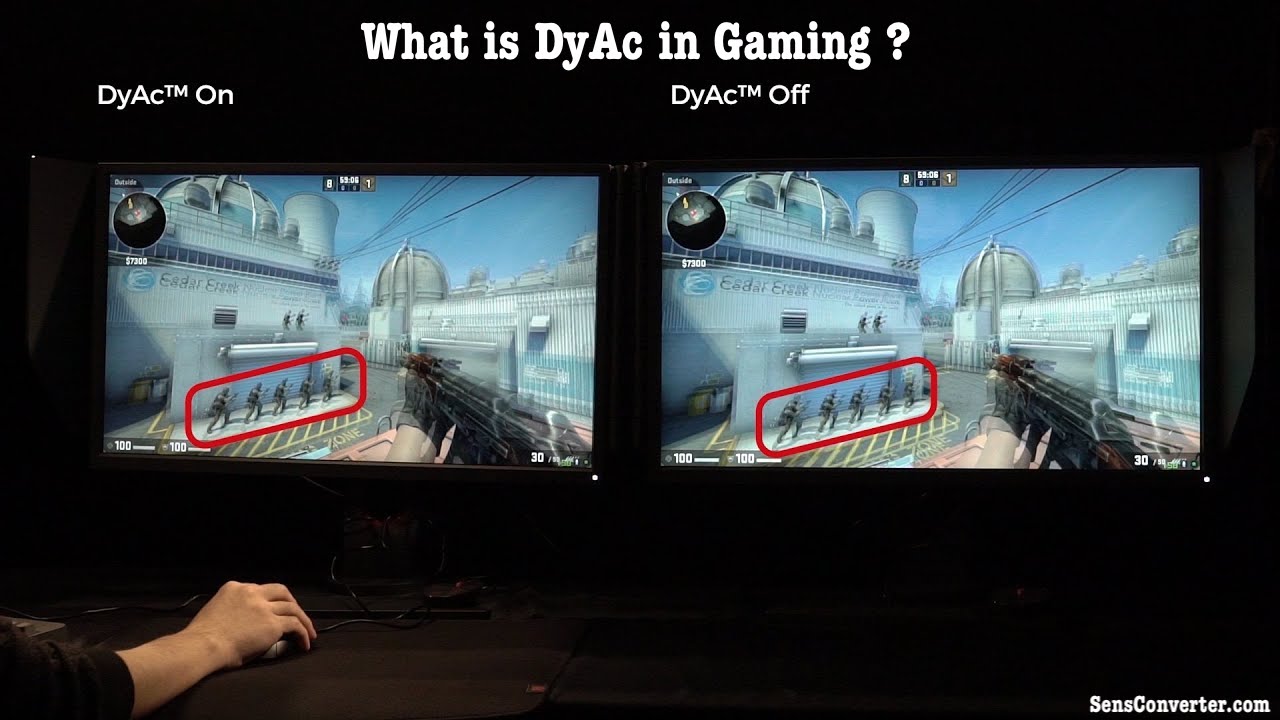 Gaming monitors are getting equipped with advanced technologies to provide you with an exceptional experience. Being able to see the fast-moving characters and objects in a game is of vital importance. Hence, gaming LCD monitor manufacturing brands now offer their own proprietary version of blur reduction. One such technology is DyAc, which you might have come across and wondered what it is all about. Here is everything you need to know about DyAc.

DyAc refers to Dynamic Accuracy in gaming. It is a proprietary BenQ Zowie technology that prevents fast-moving scenes from blurring during gameplay. This Blur Reduction technology is found in the higher-end BenQ Zowie LCD gaming monitors to ensure clarity of vision and improved performance.

How good is DyAc?

DyAc is very good for performance gaming like CS: GO and any other FPS game that requires too much precision. It works by energizing the GTG response time and improving the way a monitor refreshes. Hence, it gives you a more stable image and a very smooth gaming experience.

Motion blur usually appears due to the lingering effects of fast-moving games. DyAc aims to fix motion blur when you play such games. For normal use or gaming that does not require a lot of precision, DyAc does not make that much of a difference. Hence, you can turn it off occasionally when you do not need this feature.

What does DyAc do on a monitor?

DyAc is a technology that reduces motion blur on the latest BenQ Zowie LCD monitors. It aims to fix the vigorous screen shaking in-game issue, which is evident when you play CS: GO and other FPS games. These games feature fast-moving scenes where it becomes difficult for the gamers to keep their focus. DyAc solves this problem by ensuring a more stable image without causing any buffering or input lag.

Does DyAc make a difference?

Yes, DyAc makes a lot of difference when you play fast-moving games like CS: GO, Valorant, Overwatch, League of Legends, and similar ones. It gives you the sharpest image without introducing any input lag. As a result, you get more control and may play better.

However, you won’t see that much of a difference when you play other games on the same monitor. Some users say that they turn it off because they are not impressed by DyAc. So, the difference ultimately varies from person to person.

Does DyAc cause input lag?

DyAc doesn’t cause any input lag as it doesn’t add any buffering. However, like any other backlight strobing method, DyAc may technically add a very small amount of input lag, which can be anywhere between 1-3 milliseconds. It may happen because the backlight strobing method retains the images for a couple of milliseconds to give the LCD pixels time to transition. The input lag is so low that it doesn’t matter at all. For this reason, many users will answer no to the question.

No, DyAc doesn’t reduce screen brightness. Instead, it maximizes brightness and gives you some freedom to adjust it as well. The main functionality of DyAc lies in reducing motion blur, which has nothing to do with screen brightness. DyAc is voltage-boosted in such a way that it will always enhance the clarity without reducing screen brightness a bit. Most users say that DyAc has made their screens much brighter than before.

Does DyAc work on the console?

DyAc works on consoles provided the input content is 100Hz or above. DyAc is a proprietary technology developed by Zowie that works independently in BenQ Zowie gaming monitors. It is compatible with any PC setup or console when the monitor is a high-end BenQ Zowie and the input content matches requirements.

Do pros use DyAc?

No, not all pros use DyAc. The preference of using DyAc varies from individual to individual. While some pro gamers prefer to have it on, some like to have it off. It’s difficult to say how many professionals switch it on.

While some pro players say they use this feature and they love it, a huge number of CS: GO pros play on monitors that don’t even support G-Sync. However, the number of DyAc users is growing rapidly which means that many professionals might find this technology worth it.

Do CS: GO players use DyAc?

A lot of CS: GO players use DyAc due to its motion blur reduction. Aceu uses DyAc whereas Zywoo, s1mple, and Niko do not use this feature. Based on BenQ Zowie’s information, some features in DyAc were developed keeping in mind specific features of the CS: GO game. For example, DyAc helps to control shocky recoil, like that from the AK-47 in CS: GO. Yet, I won’t say that DyAc is limited only to CS: GO.

Does Aceu use DyAc?

Yes, Aceu uses DyAc, which is mentioned in Aceu’s setup profile. Once you scroll on the profile, there is a list of Aceu’s gaming gear. We have found DyAc listed there among other gadgets.

Aceu is a professional Apex Legends player for NRG with a huge reputation in the gaming community. He has created history in games such as CS: GO, Fortnite and Overwatch. The number of followers of Aceu on Twitch.tv has crossed 14,000.

Yes, DyAc works at 240Hz in Zowie XL2546 Monitors. Among all the high-end monitors from Zowie, XL2546 is a popular one. It is known for various attractive features including DyAc that can aid your gaming experience.

Yes, DyAc is a blur reduction technology developed by the brand BenQ Zowie. It is available on BenQ Zowie high-end gaming LCD monitors. This technology helps you to see a blur-free image while playing fast-moving games.

Yes, Zowie XL2546 comes with DyAc, which is one of the reasons why this monitor is so expensive. Other features of this monitor are its 24.5-inch TN panel, sleek bezels, 1080p 240Hz panel with one millisecond response time. All the features reflect that the monitor is crafted for gamers.

The only difference between Zowie XL2540 and XL2546 is that XL2546 supports DyAc. The two monitors from the house of BenQ Zowie are highly identical. The overall picture quality of these two monitors is also similar. However, DyAc makes a lot of difference by reducing blur in XL2546 when playing fast-motion games. Once DyAc is turned on in XL2546, the Flicker-free technology automatically gets turned off making this difference.

What’s the difference between BenQ and Zowie?

Although BenQ and Zowie are from the same company, they have merged their names to create a new gaming brand named BenQ Zowie. It seems to be a branding change.